Theatre company The Letter Room create fearless, boundary-breaking music theatre, one that captures the energy of a night out and the intimacy of live performance and now they will be turning their hats to Shakespearean times to create something very special in store.

On the 10th and 11th September The Letter Room will be creating raucous little pockets of theatre that puts the audience in a Shakespearean world to celebrate the Shakespeare ReFASHIONed scheme. They will be enhancing shoppers experience, getting them laughing, clicking their fingers and maybe even dancing. The performances will take place at 2pm and 4pm on the Saturday and Sunday and will run  floors of the Exchange Square store.

The whole weekend will be full of acoustic live music, some original and some twists on
recognisable tunes. The Letter Room will perform excerpts from four Shakespeare plays. Performers will be looking super sharp, incorporating modern day fashion with bygone eras to create an exciting, otherworldly interpretation of some of Shakespeare’s most famous characters.

Head down the escalators to the Lower Ground’s beauty floor the underground speakeasy
where Juliet is the singing diamond. There’s music and dancing, everyone is beautiful and it’s a party. Think Baz Lurhman’s Great Gatsby. As the Capulets are getting ready for the masquerade ball behind the scenes we might just see Romeo and Juliet meet for the first time. 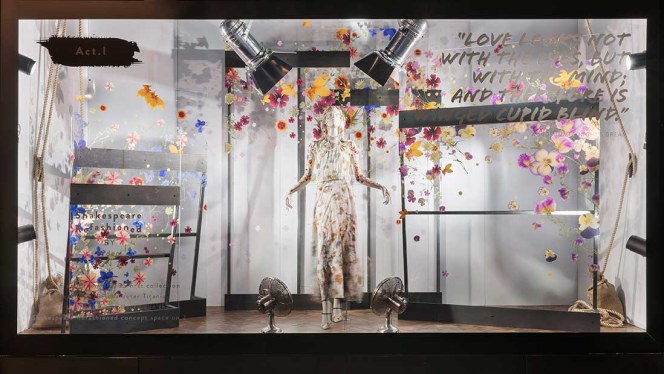 On the ground floor, Malvolio is donning his most favourite accessories….the yellow stockings. That hugely famous scene from Twelfth Night unfolds among the shoes and handbags, farcical and fierce. In his garters and stockings, we’re looking to take a nod at the burlesque and freak show inspired the world of the French vaudeville.

First-floor menswear we meet Rosalind and Celia from As You Like It where Rosalind is trying on her new threads, to impose as Ganymede to win the heart of Orlando in the Forest of Arden. Think “Peaky Blinders go to the races”, Rosalind and Celia dressing as members of a post world war 1 gang. Music inspired by Nick Cave, Jack White, PJ Harvey, a pared backed bluesy alternative soundtrack.

The second floor takes you up to 1950s glamour, think mad men and sharp suits. Here we’ll look at the ever-developing role of women and namely the independent and rebellious Kate from Taming of the Shrew. We’ll use Rock and Roll music, the Buddy Holly’s and the Don Cherry crooners as the characters sip on cocktails.

It’s a weekend not to be missed in store with guaranteed fun and frolics in the fabulous Exchange Square store. The Shakespeare ReFASHIONed scheme celebrates four hundred years after his death with a range of in-store activity and exclusive product.